skip to main | skip to sidebar

It’s time to share my recipe for French King Cake !

“La galette des Rois” , the cake of the Kings, is a cake celebrating the Epiphany. The Epiphany is a Christian feast which celebrate the visitation of the three Magi (Balthazar, Melchior et Gaspard) to the child Jesus.

In France, we celebrate it, the second Sunday after Christmas. On Epiphany, and all the other days of January, we eat « la galette des rois ». It is a kind of « king cake » made of puff pastry and filled with frangipane ( a mix of almond, butter and sugar).

The tradition is to put inside a trinket (fève) which is usually a porcelain figurine. There are very varied kind of « fèves » and most of French people like to collect it. After cuting the cake in as much part as they have guest, it is usual for the youngest person to go under the table and name the person who will have each piece. The person who gets the piece of cake with the trinket becomes "king" for a day and should wear a paper crown. We usually drink champagne with this cake. You can bake « la galette des roi » or find it in all the French bakeries in January. The cakes are usually sold in special bags, some of which can be used to heat the cake in a microwave without ruining the crispness of the cake. Posted by Valerie, Aventures Californiennes at 10:33 AM 2 comments: 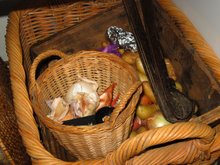